We have just completed another Rewire in Stafford

As a Localy based company is always nice to do rewires in Stafford keeping our travelling costs down saves you money.

Mr Philips called us up for a quote in Parkside Stafford after choosing us from the three quote he had from other electricians in the area.

After assessing the job it was clear there was old black rubber cable mixed in with existing cable, this is potentially dangerous and needed to be replaced as soon as possible.

Once our WHICH? Trusted Trader paperwork had been signed were good to get started on the planning.

There were certain feature wooded walls and brick faced walls that could not be damaged, In the planning stage we made sure that no damage would occur to these areas.

Once Mr Philips was happy with the plans, that had been drawn up on were sockets / lights were going we started the rewire.

it is very important to Day and knight that disruption to our customers is kept to a minimal  and all essential Electrical services are kept on like fridges, cooker, shower, boiler,  some sockets and light’s.

The rewire was completed in a week to the delight of Mr Philips.

Mr philips now only had the plastering and decorating to do and had the safe knowledge his electrics were now safe and compliant to 17th edition wiring regulation and part P building regulation.

And with our 12 month FREE call out on parts and services warrinty he has peace of mind.

And a 10 year Electrical Installation certificate, for himself,  the house resale if he chooses and insurance purposes incase of claims.

THANK YOU  Mr Philips for letting Day and knight make you safer. 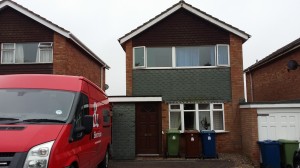